Hollis Taggart is pleased to announce Bill Scott: Process and Continuity, and exhibition of recent works by contemporary Philadelphia-based artist Bill Scott, on view May 18 to July 9. This exhibition, curated by Vivian Bullaudy, Director of Hollis Taggart Galleries, continues Hollis Taggart Galleries’ commitment to bring to light the Philadelphia tradition and its enduring significance in American art history. Scott’s painting lay within the cultural continuum of the Philadelphia colorist tradition, passed on to him and his contemporaries through mentors such as painters Quita Brodhead and Jane Piper, who were themselves students of Arthur B. Carles, the pioneer of Philadelphia modernism. Also a student of the globally recognized abstractionist Joan Mitchell, Scott fuses his local artistic heritage together with the raw energy embedded in her abstractions. It is this unique combination of influences - including abstract compositions, saturated color, calligraphic line, large scale, and pure vitality - that drive Scott’s recent paintings and instill them with expressive spirit.

A fully illustrated color catalogue will accompany this exhibition of energetic, colorful compositions. The catalogue essay by Richard J. Boyle, a former Director of the Pennsylvania Academy of the Fine Arts from 1973 until 1983, examines Scott’s work in the context of his artistic education at PAFA and from his tutelage under influential artists, most notably Piper in Philadelphia and Mitchell in Paris. His paintings unite his subsequent inheritance of the colors and forms found in Nature. Scott’s recent work also marks his return to oil painting - after exploring printmaking, acrylic and watercolor - to facilitate his abstract articulation of landscapes and gardens.

The underlying geometry of brilliantly colored patchworks in Scott’s paintings evokes the sensations and textures of collage. Complementing these blocks of color are often overlying, dark lines that serve to weave the pictorial arrangements together. Of this new compositional element Scott has stated, “...the authority of the printed etched line, more than anything else, has impacted on my recent paintings.” In Scott’s work, the harmony created by calligraphic lines and a vivid palette defines the surfaces of his canvases and infuses the images with animation and depth.

In Ranunculus and Poppies of 2003, for example, a diverse array of greens recall lush gardens, highlighted with flowers reduced to powerful spots of color and lines articulating their stems. For Scott, Nature, structure, and memory come together in such paintings as Quince of 2004. This composition was inspired by a quince tree that stood outside the studio of his close friend, the Philadelphia artist Quita Brodhead. The painting exists as a remembrance expressed through a lavishness of pink hues - for both Brodhead’s studio and the tree were razed after her death.

In both paintings Flowers I and May Landscape of 2003, Scott unites his sensibility with that of Arthur B. Carles. In these works, the stability of Scott’s blocks of color gives way to an agile and expressive fluidity reminiscent of Carles’ own abstract language. In such a way, they pay homage to the Philadelphia painter who so inspired generations of the city’s art world. In Flowers I, Scott’s patches of colors both stand out and flow into one another, and are pieced together with floral forms blossoming throughout the composition. May Landscape is a vision of spring, as the landscape is overrun by the vivid, sprawling bloom.

Scott’s continuity and legacy within the Philadelphia tradition, untied with his own unique process and approach to composition and form, have been recognized by colleagues, critics and collectors. His work has recently been accepted to the National Academy Museum’s 179th Annual: An Invitational Exhibition of Contemporary American Art, on view May 6 to June 20 in New York City. 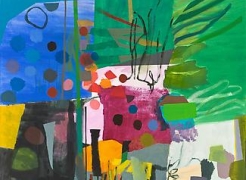