“Inheriting Cubism: The Impact of Cubism on American Art, 1900-1936,” will be on view at Hollis Taggart Galleries from November 28, 2001 through January 12, 2002. Approximately forty paintings, drawings and watercolors culled from distinguished private and public collections as well as the gallery’s inventory will be included in this exhibition. The National Gallery of Art, The Metropolitan Museum of Art, the Philadelphia Museum of Art and the Hirshhorn Museum and Sculpture Garden, Smithsonian Institution are among the museums who will be generously contributing loans to this exhibition.

“Inheriting Cubism” will examine the impact of European Cubism on the artistic evolution of a key group of American artists working in the period from 1909-1936. The exhibition, and its accompanying catalogue featuring an essay by Dr. John Cauman, will chronicle the influence of Cubism on the artistic, intellectual, and cultural climate in America. It will focus on a critical period in the development of American modernism when American artists first inherited the legacy of European Cubism and created provocative new work reflecting the tenets of this revolutionary art. As the exhibition catalogue demonstrates, Cubism left few modernist styles untouched and permeated the intellectual debate and the popular culture of this country. It was, as the critic Henry McBride proclaimed in 1914, “the movement of the day––and still moving.”

Featured in “Inheriting Cubism” will be examples of figurative imagery, still life, and works verging on abstraction. Among the highlights of the exhibition will be several paintings by Max Weber including the early Cubist 1913 masterpiece, Woman in Tents. Weber, who was present in Paris at the dawn of Cubism, played a critical role in the early dissemination of knowledge of European Cubism in the United States. Over the course of his early career he created among the most inventive and significant examples of Cubism by any American modernist.

In addition to paintings by Max Weber the exhibition will include such highlights as Charles Demuth’s 1919 Sail: In Two Movements in which the artist used nature as a point of departure for his Cubist investigation of form and structure. Also featured will be Marsden Hartley’s Provincetown of 1916-1917, a highly distinctive painting which announces the profound impact of collage and other elements of Synthetic Cubism on Hartley’s evolving aesthetic. Other Cubist imagery selected for presentation includes work by Morton Schamberg and Joseph Stella, which reveal the new realities of the industrial landscape and the machine age. These diverse artists and the many others represented in this exhibition were linked by their use of Cubism as the scaffolding upon which their art was built. They worked, at least for a time, in a Cubist-inspired mode and assimilated the lessons of this revolutionary art form in original ways. American artists discovered new and different directions for the development of Cubism, in many instances pushing beyond the parameters established by their European counterparts. 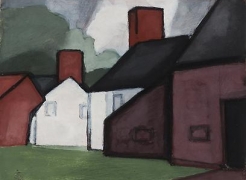 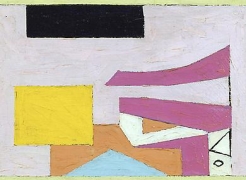 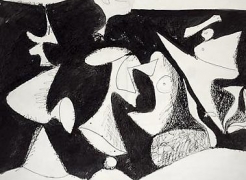 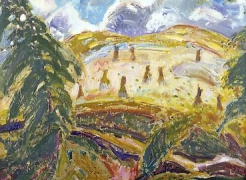 INHERITING CUBISM
The Impact of Cubism on American Art, 1900-1936